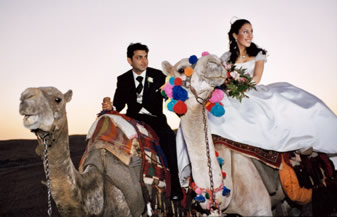 My father is Middle Eastern, my mother hails from Louisiana’s Cajun country, and I’m proud to say that both cultures have always been an integral part of who I am. I can make hummus and shrimp gumbo pretty darn well, and I can swear in Arabic and Cajun French if the need arises. We’re also Texans, so that means we all can whip up a mean barbecue, too. When I became engaged to Jon, who has Nordic and German roots, we just sprinkled a few more ingredients into our family’s melting pot. My relatives happily welcomed him into the fold, and luckily his did the same to me.

I don’t think my story is all that special. As those of us with diverse ethnic backgrounds blend into the American cultural landscape, we still identify with the heritage that made us who we are. It’s only natural that we’d want our customs to be a part of important events in our lives, especially weddings. One of the great things about modern times is that when it comes to choosing a mate we’re much less constricted by race, religion or nationality than our parents were. Which means that more and more, multicultural elements are enriching weddings in intriguing and innovative ways.

Including those elements, however, can sometimes be a challenge. Anyone who has planned a wedding joining two or more distinct cultures knows that if you aren’t careful, more than the wedding colors may clash. I knew I wanted to incorporate some Arabic traditions, but at the same time I was concerned about alienating Jon’s relatives. To avoid potential conflict, I decided to keep the wedding “culture-neutral.” It was only after I discussed my plans with my parents that I realized the safe approach wouldn’t work: eliminating our family’s time-honored customs would not only make the occasion less meaningful for them, but for me as well. I concluded that if Jon and I really wanted our families to feel comfortable, we’d have to involve them in the planning.

What was most important to my father was that we be married in the Antiochian Orthodox Church—a privilege restricted to those who had received a particular type of baptism. To achieve my father’s fondest wish, my fiancé gamely volunteered to be baptized by Dad’s priest (there was no baby pool like in the movie My Big Fat Greek Wedding, but yes, my father is now Jon’s godfather!). Though the mass didn’t stray much from the age-old Orthodox version, we did ask the priest to speak both Arabic and English so that everyone could follow along.

As it turned out, Jon’s parents were fine with our adding Arabic touches to the wedding. In fact, they hosted the rehearsal dinner at a steakhouse and capped it off with their own thoughtful cross-cultural contribution: they went out of their way to find authentic baklava to serve for dessert. And even though they didn’t feel strongly about having their Nordic/German background reflected, we made a point of offering Scandinavian-style salmon as one of the entrées at the reception. When it was time to party, our DJ played a balanced selection of popular Middle Eastern music and American dance classics with a little country thrown in—after all, Jon and I did go to college in the heart of Texas. By the end of the night my new in-laws and college friends were comparing their belly-dancing moves!

Since I’ve become Mrs. Edd, I’m much more aware of multicultural details in other weddings I’ve attended. The events I enjoy most have effortlessly melded traditions from different parts of the world, further underscoring the idea that love transcends borders. The same year my husband and I tied the knot, his brother married a lovely woman from India (or, as I like to think of her, the best thing that ever happened to him). My favorite part of their wedding was the choice of attire: she wore a crisp white, Western-style wedding dress and he wore a sherwani, a traditional Indian jacket. The bridesmaids, sporting brightly colored saris, accompanied groomsmen in formal tuxedos down the aisle.

Together it all wordlessly said, “I take you and your culture.” Now that’s true love!

For more information, see 12 Tips For Planning a Multicultural Wedding.

Hold up! Are you in our tribe?

Some clients may have paid to be placed in our editorial and some of these links may be affiliate; however, we never include a venue, vendor, or product unless they have a proper place here. This is part of our Core Values. We create our website first and foremost to be good for the couples using it to plan their Big Day. We won't stray from that for a few advertising dollars. #scoutshonor