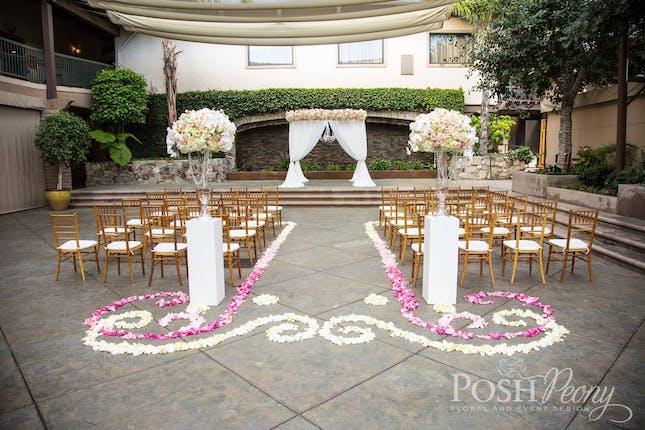 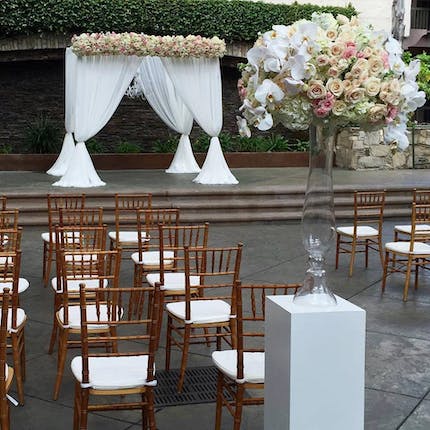 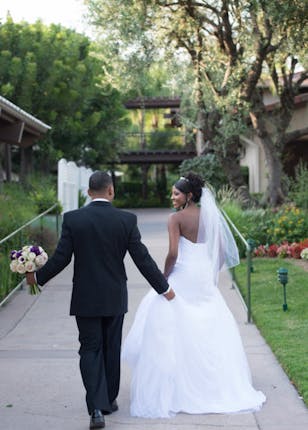 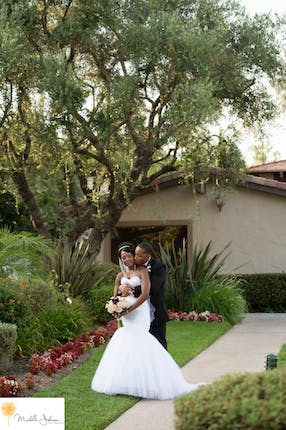 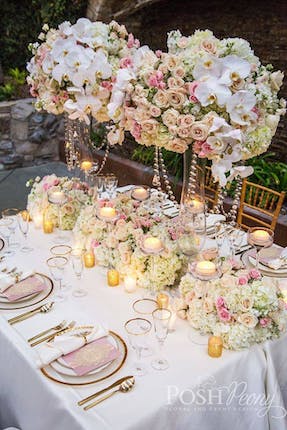 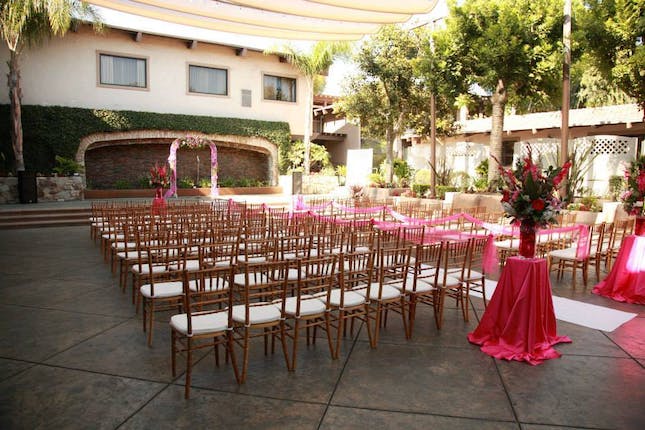 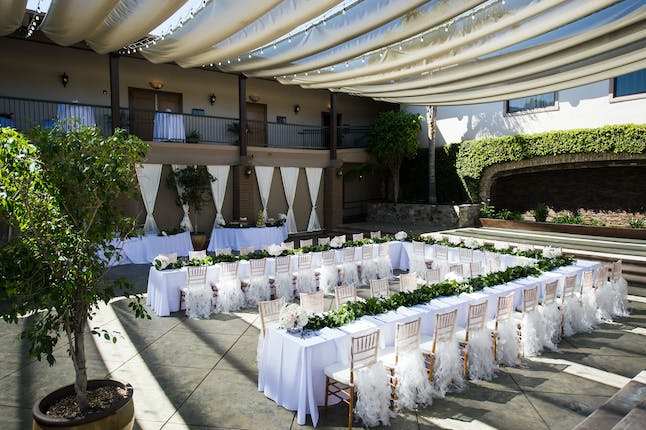 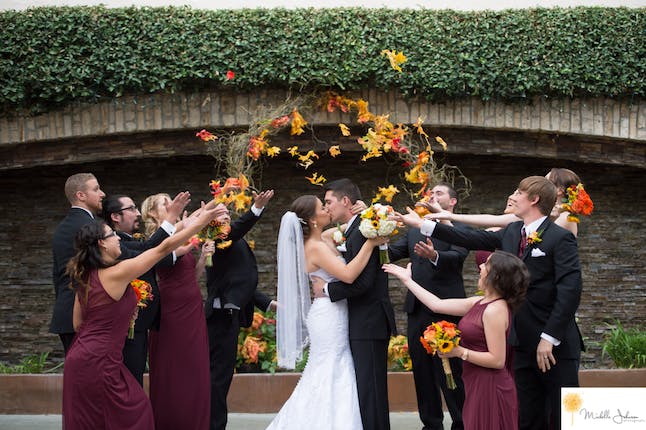 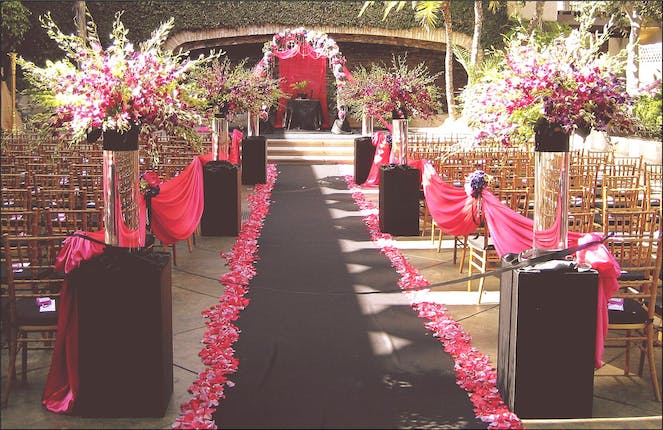 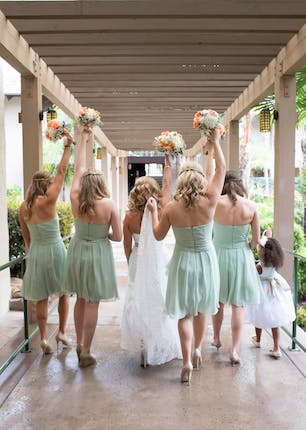 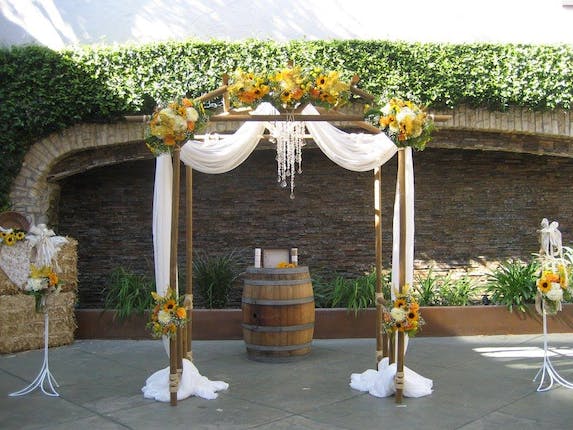 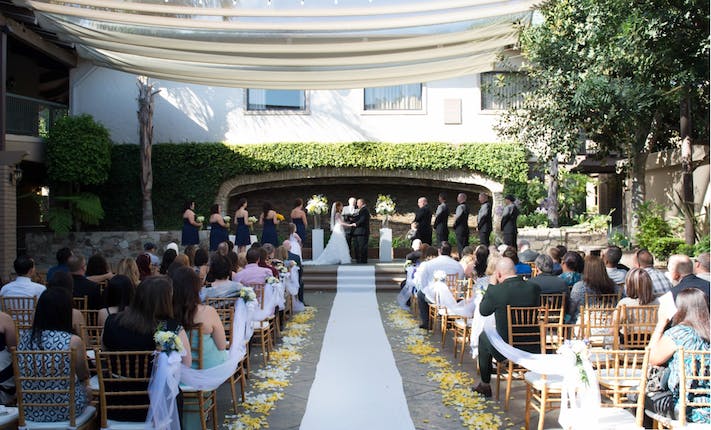 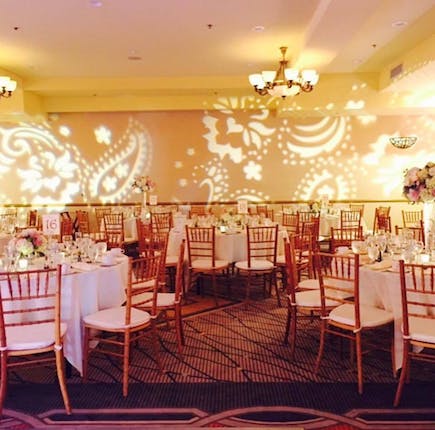 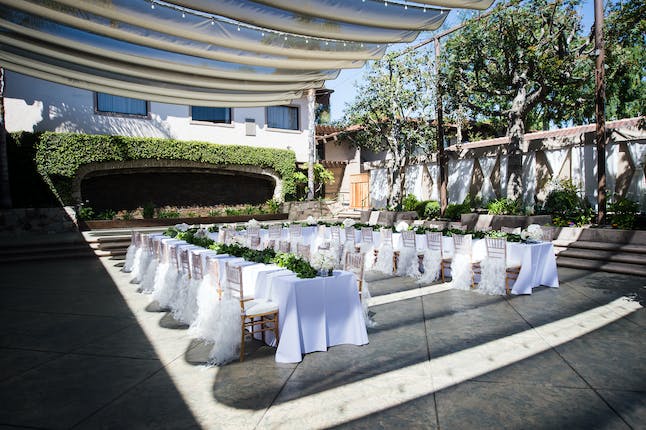 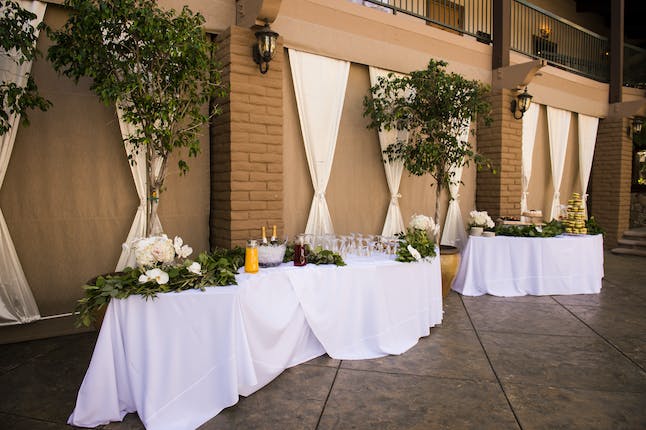 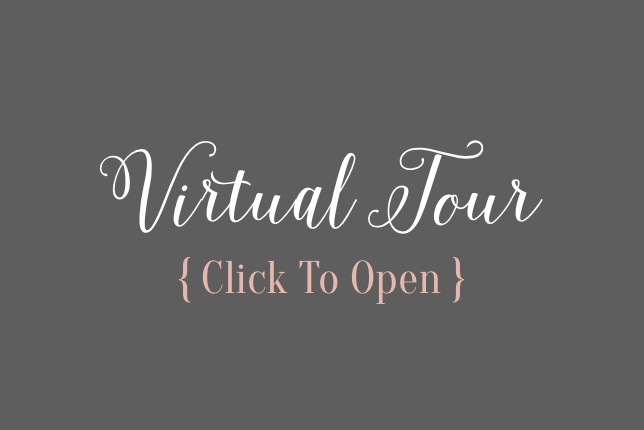 We'd love it if you would mention that you found DoubleTree by Hilton Claremont on the Here Comes The Guide website.

In Claremont, a town many people call “The City of Trees,” the DoubleTree stands out as an oasis within an oasis. Its 14-acre grounds, adorned with dozens of different species of flowers and trees as well as some beautiful sculptural elements, are a hub of social life—and weddings—in this westernmost part of the Inland Empire. Besides the earthy and exuberant subtropical feel of its landscaping, the 50-year old local landmark also has plenty of architectural character. While owners through the years have expanded the facility and remodeled its interior, they’ve done so carefully, keeping the boutique-hotel vibe intact.

The heart of the DoubleTree is its courtyard, by far the favorite location for weddings. Brides love it both for its look and its privacy (it’s closed to everyone but wedding party guests for the duration of the ceremony). The courtyard’s focal point is a water feature at one end—a long slate-brick wall set into a high, arched alcove. Water runs gently down the stone, calling to mind the cooling Moorish fountains of old Spain. The water’s sparkle and soothing sound are delights to the senses, and add a tranquil element to any gathering. Sometimes, when there’s a breeze, swirls of mist dance away from the wall—an entrancing sight. A colorful fringe of ivy, palms and flowers frames the fountain, while overhead, bright cloth streamers span the courtyard and shade people from the afternoon sun.

Just steps from the courtyard, DoubleTree’s two neighboring ballrooms are typically used in tandem: one for a cocktail reception and the other for their seated dinner. The hotel also regularly and seamlessly hosts small weddings in its inviting Cedar Room on the second floor. Guests often like to mingle outside on the room’s arcaded veranda, where they can enjoy some people-watching in the courtyard below.

An independently operated on-site day spa is a welcome haven for the bride and her entourage to prep for the ceremony or wind down and relax. It’s co-ed, so men in the wedding party can step in and have some fun, too. Also on the property, but detached from the main buildings, is “Piano Piano,” a lounge that’s perfect for bachelor, bachelorette or boy-girl parties. With its dozens of nightclub-style tables and booths, and a stage set with two pianos that professional players often use to engage in some uproarious musical duels, “Piano Piano” is a fine place to get noisy and happy. People can let off steam without worrying about the neighbors.

Getting married at the DoubleTree is like cocooning yourself in a beloved local institution that manages to be hip and traditional, efficient and hang-loose, formal and casual—all at the same time and all to the right degree. When you stand before that glistening slate fountain with your groom, surrounded by greenery, golden light and affectionate well wishers, you’ll experience the world at that moment as being just about as right as it can possibly be.

EVENT/RECEPTION CAPACITY: The hotel can accommodate 250 seated or 400 standing guests indoors and 100 seated or 300 standing outdoors.

We play nice. We promise never to share your info with anyone except DoubleTree by Hilton Claremont.

Thanks! Your email to DoubleTree by Hilton Claremont is on its way!